I have had a remarkably productive weekend, for me.  Yesterday I worked my second job for 8 hours, which means that I read a Nabokov book. After that I went out and replaced my phone, which had been broken for several months, and had a nice dinner with family.  Then I came home and enjoyed some fine beverages and Netflix programming while setting up said phone.  Today I woke up at the crack of 11, went out for breakfast with the family, and cleaned my bedroom top to bottom.  I then drank some beer, made some banana bread, took a hot bath and beat the Indianapolis Colts 45 to 7.  Wait, was that not me?  Well without that it looks like I just kicked back, ate too much and took care of a few things.  Well bollocks, I’ve earned a reward for all that anyways.  My reward tonight?  See title.

Let’s flash back some four or so years—a young man is turning 21.  Said young man may, and this is not an admission of guilt (you can prove nothing,) have been known to have a premature fondness for the brown spirits.  At that time, this young nameless man was in the practice of keeping on hand a bottle of bourbon, a bottle of Irish and a bottle of cognac about, finance permitting.  So, come this young man’s 21st birthday, a generous benefactor / my father’s girlfriend, gave said young man a bottle of the title spirit—Bushmills 10 year Single Malt.  It was wondrous, eye opening even, for a fella who was used to your standard Irish blends.  That bottle was a revered treat, saved only to start a special night—one that more than likely involved listening to Bob Dylan and contributing nothing to society.  I…ehhhmmm…our anonymous subject, received a different kind of education alongside his college studies.  For some reason (read: college debt) this young man never bought another bottle of that sweet nectar, and yet has continued (I’m an omnipotent 3rd person narrator) to remember it fondly.

Well, that young man still has not bought another bottle of that sweet stuff—but my dad has.  And for the sake of that young man, so innocent and lost, let me steal a dram off my old man, and pour it out in his honor.  Right down my gullet.  Without further dudes, let me imbibe of this wee borrowed dram, and catch a couple notes. 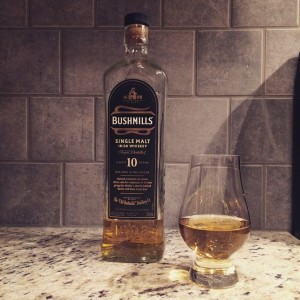 New camera is gunna step up my photogue game

From the nose I find some lovely light orange oil notes, with a very complementary dose of clove and some floating vanilla notes, to really tie the room together.  Once you sip of that golden sunshine, oh lawdy lawd—soft honey washes into miles of smooth vanilla floating on streams of chocolate milk which leave, yet linger and somehow leaves you feeling as though your palette is cleansed.  It’s lovely, almost…poetic…

In County Antrim did Sir Thomas Phillipps
a stately pleasure-dome decree:
Where Bush, the sacred river, ran
Through stills measureless to man,
Down to sweet whiskey.

Just one dram, and you too can rip off Samuel Taylor Coleridge! Anyways, this is truly a beautifully subtle whiskey, and a perfect introduction into the world of Irish Single Malts—one that you will be likely to remember fondly, as did our young protagonist for he on honey-dew hath fed, and drunk the milk of Paradise.

Exploring the World of Whiskey from Westmeath

Blues in the Bottle

Booze and blues to soothe the soul

Whiskey And Whisky For The Everyday Man

Dedicated to Whisk(e)y in all of its forms

A Blog about Music and Popular Culture

Bringing beer to its rightful place at the dinner table.

From before the blues began

i have thoughts. here's my blog.

because i'm too narcissistic to just write in a diary.

Booze.Blog : Home of the Booze Guru

“I drink and I know things.”

The Power of Words