The newest member (I’m pretty sure) to Jameson’s diverse line of Irish whiskies.  I have previously noted the role of the Irish in introducing me to the wonderful world of whiskey, and I’ll admit to quaffing my fair share of their main spirit, which is perhaps America’s best known Irish.  But I’m not reviewing that.  I’m reviewing the Black Barrel, Jameson’s more rebellious and slightly more expensive next step up the ladder.  I say next step up because there are so many products in their line that I have really lost track. Anyways, what distinguishes the black barrel is its considerable age jump over your standard Jame-O to 12 years, and the time that it spends its hibernation time splitting time between a bourbon barrel and a sherry barrel…like a somewhat damaged child of divorce.  That got dark (pun intended.)  So yeah, full disclosure, this is a single shot review, because dear ol’ dad and I drank the rest.  In the spirit of the single shot review, and in the furtherance of ending my sober rambling, down the hatch! 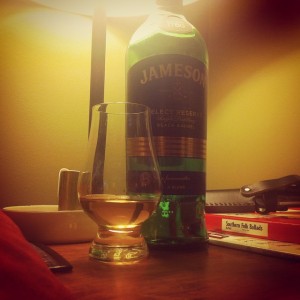 Nose: Sweet, with vanilla, cherries, a bit of must, partly from the barley I suspect.  Maybe some spice too.

Taste:  The entry is very soft with some light vanilla and some nice round fruity notes, maybe that cherry I smelt, I suspect, and maybe something a bit lighter…apple? Pear? The flavor fades out clean with a bit of grainy grassiness before leaving just the slightest tad of oak on the tongue.

Final thoughts? A worthwhile jump from the $23 standard to the $35 Black barrel.  It’s delicate, infinitely quaffable, and while it has a level of complexity it’s very approachable, both in flavor and price; which I think is the point.  If you’re used to thinking of Irish Whiskey as a shot, perhaps this could be a nice next step on the ladder to appreciation for you.

Author’s note: I don’t actually down drinks for the single shot series—I’m a liar and a phony, and kind of need to take a few sips to get my thoughts straight.

Exploring the World of Whiskey from Westmeath

Blues in the Bottle

Booze and blues to soothe the soul

Whiskey And Whisky For The Everyday Man

Dedicated to Whisk(e)y in all of its forms

A Blog about Music and Popular Culture

Bringing beer to its rightful place at the dinner table.

From before the blues began

i have thoughts. here's my blog.

because i'm too narcissistic to just write in a diary.

Booze.Blog : Home of the Booze Guru

“I drink and I know things.”

The Power of Words